University of California at Berkeley

Donald A. Glaser Physics 111A

© 2015 by the Regents of the University of California. All rights reserved.

Reprints and other information can be found on the Physics 111 Library Site.

Legends: See the Syllabus Web pages for details on introductory Advice next to Glossary.

Before coming to class complete this list of tasks:

·        Perform any circuit calculations use Matlab or anything that can be done outside of lab using RStudio (freeware).

1. Calculate the Fourier coefficients for the ramp waveform shown below: 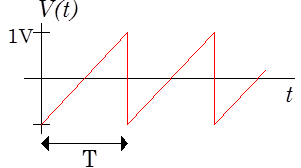 2. How does the scope probe work?

3. Approximately what is the Q of the KFOG-FM transmitter?

Next, show that the detuning $\Delta\omega $ is approximately given by $\Delta\omega\approx1/(2RC) $. The detuning, sometimes called the resonance width, is the frequency shift $\Delta\omega=\omega-\omega_0$ that reduces the power in the resistor by a factor of two from the power at resonance.  To derive $\Delta\omega\approx1/(2RC) $,  make every possible approximation; if you work with the full complex expression for the amplitude, you will very likely get lost.  For instance, you only really need consider the denominator.  Further, you should approximate the square root; this approximation is valid in the limit that the $Q$ is reasonably large.

Finally, calculate the $Q=\omega_0/\Delta\omega$  of this circuit.  This formula for Q is the one we will use when we are speaking in general and/or approximate terms; when we do precise calculations we will put a factor of 2 in the denominator, as will be explained below.  The reason for the confusion is that people often talk about the Full Width at Half Max (FWHM) and this is approximately equal to 2 times the Root Mean Square (RMS) width for a Gaussian distribution [Note that an extreme case is the Lorentzian distribution, where the RMS width is infinite and the FWHM is of course finite.]  There are also many people simply use the term "the width" for the RMS width.

In last week’s lab, we showed how the concept of complex impedances extends our ability to analyze circuits to those driven by pure sinusoidal waveforms. However, our circuits will be frequently driven by waveforms more complicated than pure sinusoids. Fortunately complex impedance analysis is easily extended to include circuits driven by any repetitive waveform by using the fact that any repetitive waveform can be decomposed into a (possibly) infinite series of harmonic sinusoids. The mathematical technique which performs the decomposition is called Fourier Analysis – you should have already studied this technique in your mathematics classes. In summary, any waveform $F(t)$ which is repetitive [has a period $T$ defined such that $F(t+T)=F(t)$ for all $t$] can be synthesized from the infinite sum

which is the same as

where the Fourier coefficients are defined as

where $\omega_0=2\pi/T$.  The formula for  $B_n$ is to be used only for nonzero values of n.  The lowest order sinusoid ($n=1$) in the infinite sum is called the fundamental; all the other waveforms are referred to as the $n^\mathrm{th}$ harmonic.

A circuit combining an inductor and capacitor in parallel, sometimes called a tank circuit, will oscillate at the frequency  $\omega=\frac{1}{\sqrt{LC}}$ .

Such resonant circuits are frequently used in physics and electronics. They have two primary applications: detecting signals oscillating at a known frequency, and generating signals at a specific frequency. The first application is exemplified by radio tuners which pick out a specific radio station (say at 1MHz) from the enormous selection of available radio stations, and the second is exemplified by the radio station transmitter itself, which must broadcast at a precisely controlled frequency  For instance, KFOG-FM’s carrier frequency is allowed to drift only 2kHz (0.002%)  from its assigned frequency of 104.5MHz.

Resonant circuits are endlessly analyzed in the course textbooks. Here we will review only a few points:

Numeric computer simulations have revolutionized many fields of physics and electronic design.  Today’s astonishingly powerful desktop computers have made simulations a common tool of almost every physicist. Simulations are used in every field: in condensed matter physics, astrophysics, plasma physics, even biophysics. And modern integrated circuits are almost entirely designed with the aid of computer tools and simulations. BUT beware of the allure of simulations. While simulations have their place for analytically intractable problems, an analytic solution is almost always worth a thousand computer simulations. Use them for problems like the band structure of a complicated crystal or to find the attractors in a chaotic system. Don’t use them to solve for the behavior of a simple harmonic oscillator.

That said, in this course you will use computer simulations to study circuits that are, by and large, analytically tractable. Worse yet, all the circuits will be readily constructible on a breadboard.  Always trust an experimental result over an analytic result, and trust an analytic result over a simulation.   To be fair to theorists, though, remember that this statement was written by an experimentalist.  And experimental results are sometimes wrong: witness Opera.

So why are we having you run simulations? Our primary purpose is for you to get a flavor of what computer simulations can do, and how they can be run. In addition, some phenomena like phase shift scaling can be studied more easily with the simulations than in the lab.

You will be required to simulate a small number of circuits as part of this course. If simulating stimulates you, you can play with many other circuits on your own. The circuits indicated by the computer icon are available in the lab and over the web. You can also design and simulate your own circuits.

The circuit simulator we use is called MultiSim, and is written by National Instruments. MultiSim is based on Spice, a very powerful circuit simulation engine which was developed here at Berkeley in 1973.  Spice by itself is almost impossible to use; it requires input in an obscure input format reminiscent of the computer input cards that went out in the 70s. Many commercial companies have incorporated the Spice engine or extensions into commercial products; MultiSim is one such implementation. It has a decent MS Windows front end that mostly hides the native Spice input format, and an adequate back end graphing program that displays the results of your simulations.

These programs are often very expensive; a single seat license for Multisim costs two to four thousand dollars.  Competing programs are even more expensive; Altium, a popular program, costs almost ten thousand dollars for a single seat license.  Various chip maunfacturers have free simulation software, but typically limit their use to the manufacturers' own components.  There are some free limited-functionality simulators not tied to maunfacturers or vendors.  Fortunately, we have a site license for Multisim; you may download a free copy from the "My Computer BSC Share" site in the 111-Lab.

The circuit solution can be graphed as a function of time. Such solutions are called transient analyses. Perhaps more useful is MultiSim’s ability to scan the master differential equation over a set of frequencies. The program can then extract some circuit characteristic like the transfer function, and graph it as a function of frequency.

An RC circuit driven by an exponential source turns out to be analytically tractable. By solving the appropriate differential equation, we can prove that the response is exponential, and find the correct multiplicative constant relating the circuit’s output to its input.  The first step is to write out what we know from ohm’s law and impedance.

The point of this discussion is to give a mathematical background and proof-by-example for a common statement in electronics: Linear circuits have linear effects.  We know this is true because all signals can be represented with exponentials (typically with complex arguements) and we just proved that an exponential input is still an exponential on the output of a circuit; only the multiplying constant changes.  We can also see that the constant is determined by the period or frequency of the signal and the RC (time constant) of the circuit.

Note how the real-world RC high-pass filter alters the shape of a square wave. Compare this to how high-pass filtering (by turning off the low frequency components) in the Fourier synthesizer alters the shape of the waveform. Why are these different?  Hint: think about phase shifts.  (There are inteesting connections to causility involved here, which you could explore if you you are curious.)

Rebuild your circuit as a low pass filter, and repeat question 2.2.

Pacific Gas and Electric provides us with power at ~120V, 60Hz AC.  Most electronic circuitry works at far lower voltages: typically ±12V DC for analog circuits and +5V for digital circuits. Transformers are used to lower the wall voltages down to voltages useful for electronics. In the past transformers were also used to change the voltage- current characteristics of signals; however, most such uses are archaic.

Problem 2.8 - Multisim Tank Simulations (Note: Never save up your signature requests; do them one at a time as they are needed. They are an opportunity for deeper exploration and reinforcement of foundations, and this process does not work well when compressed into one chunk.)

The response of passive circuits to sine waves is generally easy to analyze using complex impedances. The response of passive circuits to non-sinusoidal signals is more difficult to analyze. As was discussed earlier, repetitive signals can be analyzed by breaking down the signal into its frequency components (via Fourier Analysis), but the response to non-repetitive signals requires the direct solution of the system differential equations.

Connect the mock probe to the signal generator, and set it to output sine waves.  Scan the signal generator frequency from 10Hz to 1MHz.  Plot the response, using the scope to measure the size of the signal, as a function of frequency. What are the circuit’s measured and calculated rolloff points? Does the circuit behave like a low-pass filter?   Now draw some typical waveforms for square wave inputs.

Hint-The capacitance of the cable connecting the mock probe to the scope is important to the behavior of this circuit.  You may wish to measure this capacitance.

After completing the lab write up but before turning the lab report in, please fill out the Student Evaluation of the Lab Report.